Bertelsmann is engaged in a variety of cultural initiatives, both in Germany and internationally. The Group’s Culture@Bertelsmann activities comprise exhibitions, literary formats and concerts, as well as efforts to preserve Europe’s cultural heritage.

Culture@Bertelsmann is closely linked to Bertelsmann’s tradition and creative products – because creativity is an engine for diversity and innovation, both in the company and in society. 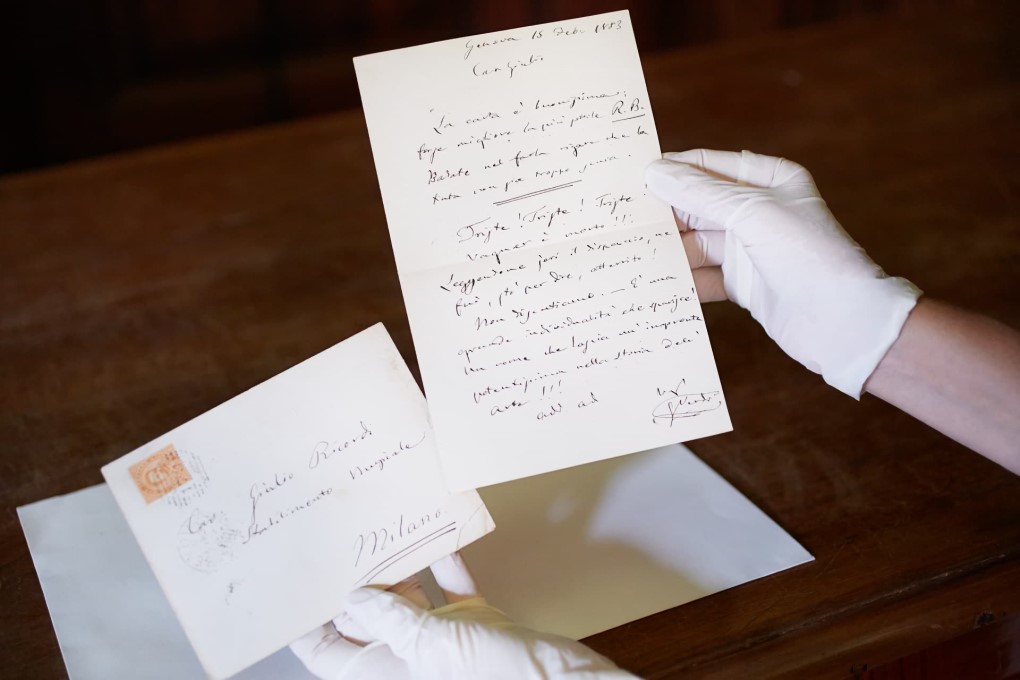 “Sad! Sad! Sad! Wagner is dead!!!” – letter from Giuseppe Verdi to Giulio Ricordi after the death of Richard Wagner in 1883.

Thousands of scores, libretti, set designs, letters and historical photographs from 200 years of Italian opera history are stored at the Archivio Storico Ricordi in Milan. They are gradually and carefully being indexed, restored and digitized by the archive’s owner, Bertelsmann. Two years after the historical stage and costume designs were made available online, an extensive collection of business correspondence has been added that provides deep insights into the cultural scene of the 19th and 20th centuries, including 30,000 business letters that the Italian music publisher Casa Ricordi received from or sent to artists and business partners all over the world.

“Sad! Sad! Sad! Wagner is dead!!!” – letter from Giuseppe Verdi to Giulio Ricordi after the death of Richard Wagner in 1883. 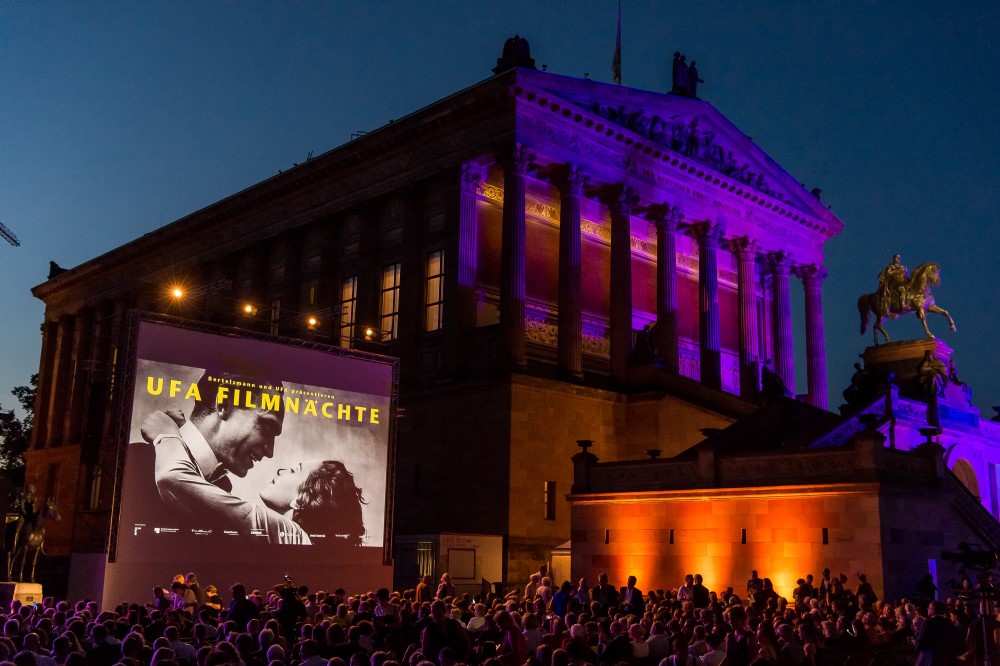 The audience loves “The Fiddler of Florence” starring the legendary Elisabeth Bergner.

With their UFA Film Nights, Bertelsmann and UFA have established a silent film festival that now attracts thousands of movie buffs in Berlin, Brussels and other cities. The highlight in 2018 was a world premiere: In Berlin, Paul Czinner’s almost 100-year-old silent movie, “The Fiddler of Florence,” was shown for the first time in a digitally restored version funded by Bertelsmann. Movie magic took place under open skies, against a spectacular backdrop, accompanied by live music.

The audience loves “The Fiddler of Florence” starring the legendary Elisabeth Bergner.

Europe on the Blue Sofa 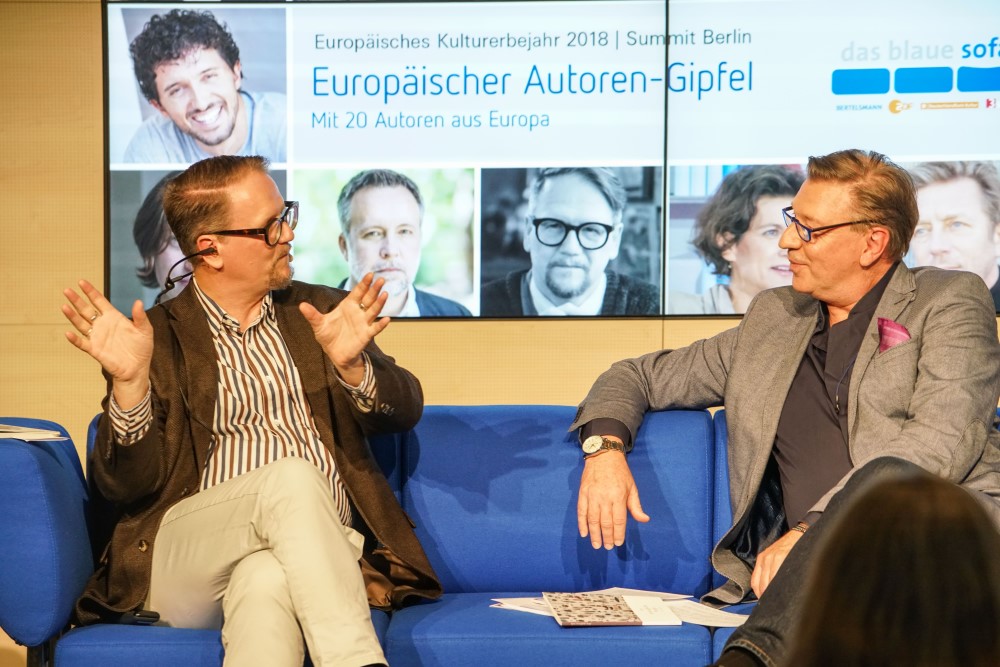 A passionate plea for Europe: the Icelandic writer Sjón with ZDF presenter Matthias Hügle on the Blue Sofa.

In June 2018, 20 authors from 20 European countries met for the “European Authors Summit” in Berlin. On the Blue Sofa – the literature format jointly organized by Bertelsmann, ZDF, Deutschlandfunk Kultur and 3sat – they discussed their books and how they experienced Europe. All differences aside, they agreed that Europe needs more solidarity and dialogue, and literature in particular can bring about understanding.

A passionate plea for Europe: the Icelandic writer Sjón with ZDF presenter Matthias Hügle on the Blue Sofa. 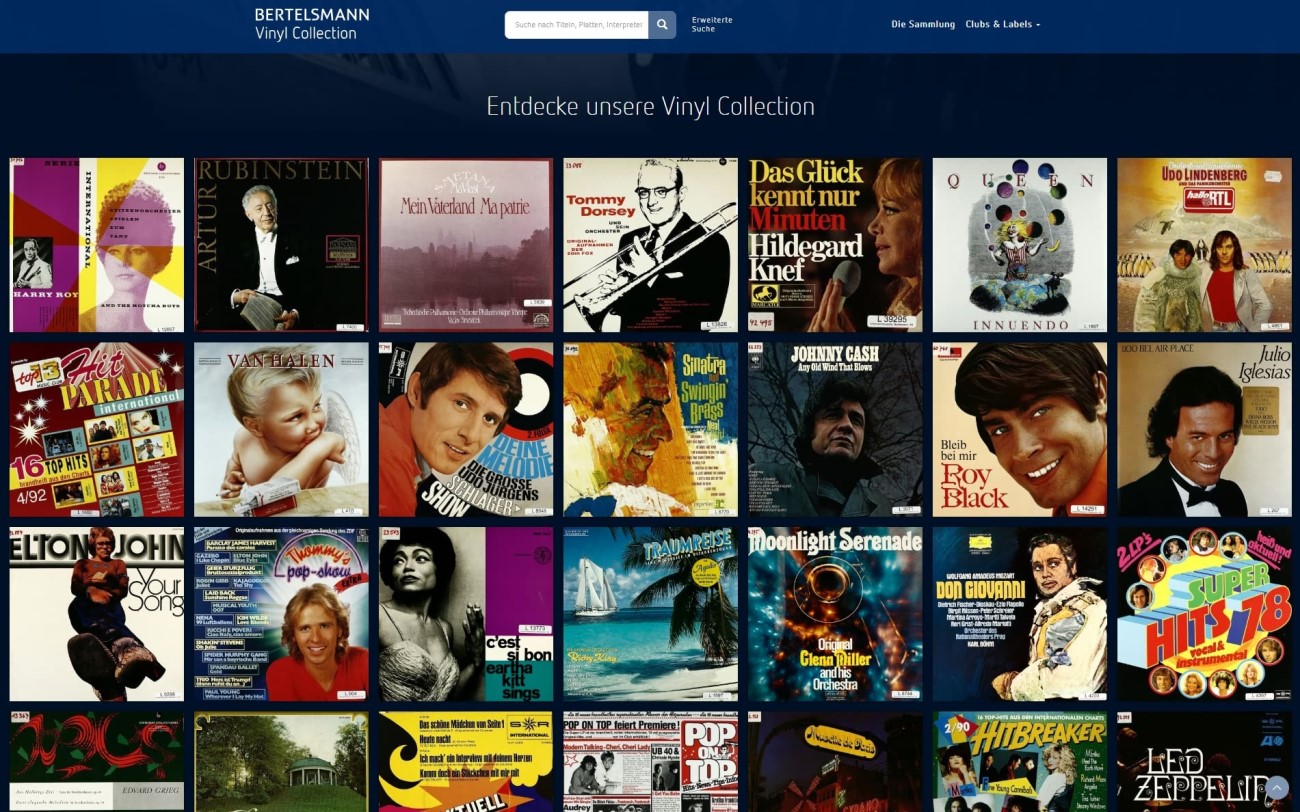 From 1956 to 1992, the former Bertelsmann music clubs offered their members an extensive selection of records – a musical treasure of which large parts can now be viewed online at vinyl.bertelsmann.com. What did the cover look like? Who were the contributing artists? For answers to questions like these, the public can now turn to the online “Vinyl Collection,” which documents more than 11,500 records in detail: informative, entertaining and varied. 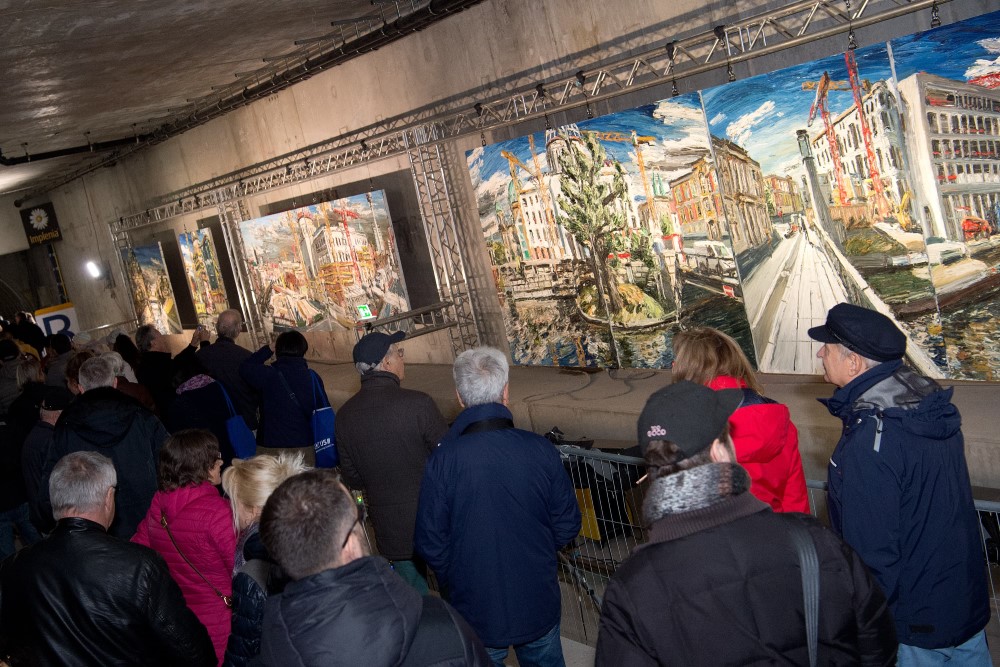 On a fall weekend, Bertelsmann and the Berlin subway construction company PRG U5 transformed the future Unter den Linden subway station into an underground art gallery. Some 13,500 Berliners flocked to the construction site to marvel at the progress being made on the three-story-deep station and admired 37 large-format oil paintings by the Berlin plein-air painter Christopher Lehmpfuhl. For decades, Lehmpfuhl has devoted himself to the capital’s architectural transformation. The pictures shown at “Bau X Kunst” (“Construction Meets Art”) documented the spectacular construction activity on Berlin’s Schlossplatz, including the Humboldt Forum. Some of the pictures were painted on the rooftop terrace of Bertelsmann Unter den Linden 1 in Berlin. 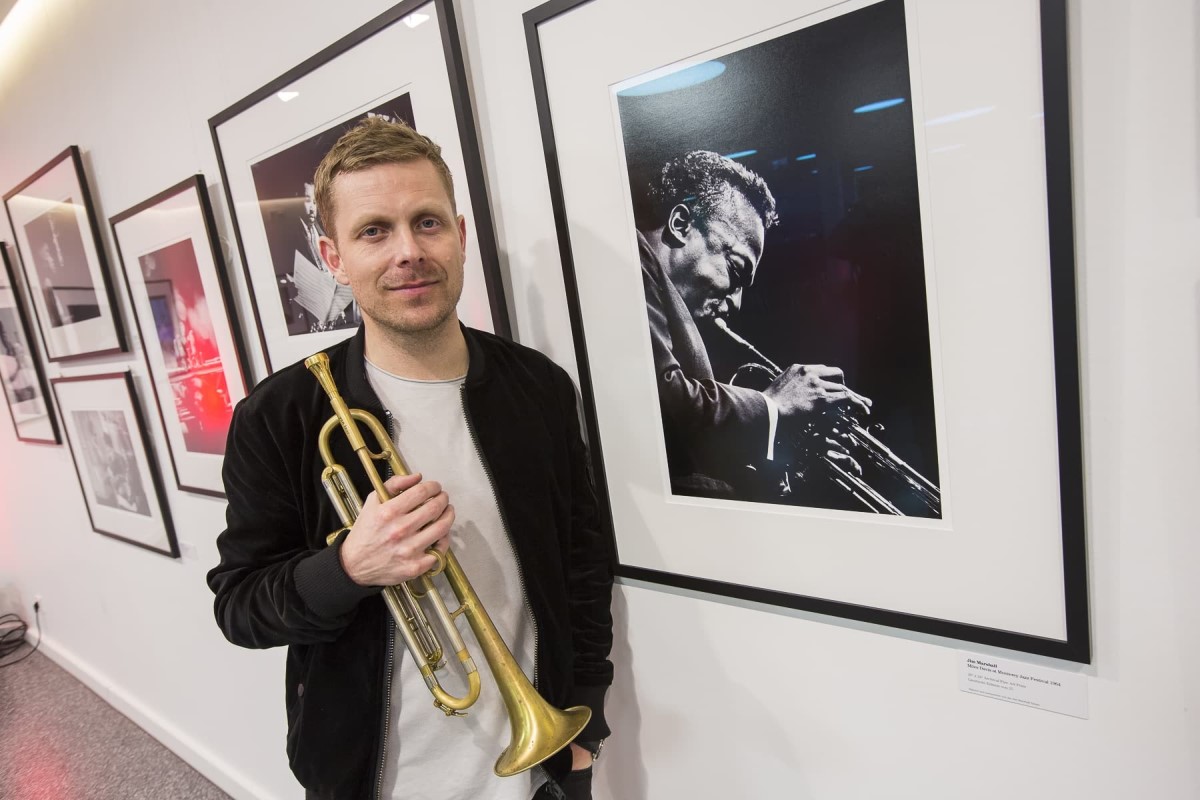 Award-winning jazz trumpeter Nils Wülker said he was thrilled to perform “under the gaze of so many heroes.”

BMG artist Nils Wülker, considered one of Germany’s best jazz trumpeters and composers, performed in a perfect setting at Gütersloh City Hall in January 2018. Jazz legends including Duke Ellington, Count Basie and Miles Davis looked on as he performed his virtuoso jazz interpretations to a sold-out venue. The concert took place in the middle of a photo exhibition devoted to the work of the celebrated music photographer Jim Marshall.

Extras
eGallery of the Evening

Award-winning jazz trumpeter Nils Wülker said he was thrilled to perform “under the gaze of so many heroes.” 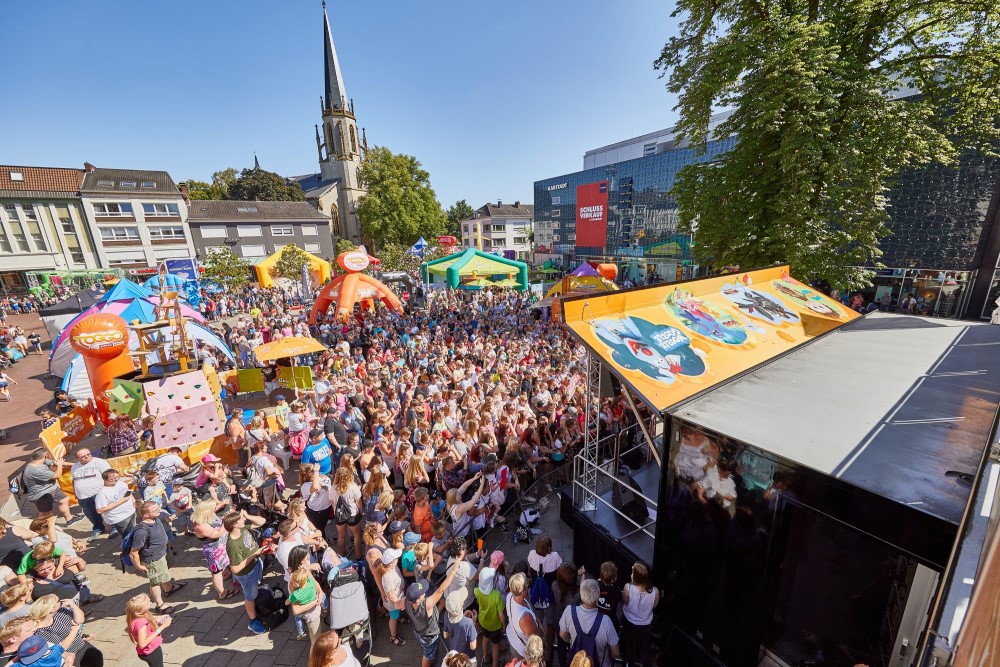 The “Toggo Tour” brought a colorful spectacle to Gütersloh.

Children’s television was brought to life on a sunny weekend in July 2018, when Bertelsmann and the city of Gütersloh presented the nationally popular “Toggo Tour” in the city center. Around 40,000 mainly younger fans came to see their favorites from the Super RTL program. Paw Patrol, Peppa Pig, Bob the Builder and the Trolls – everyone was there. The kids were treated to stage shows, dance training, a Kettcar track, bouncy castles and a reunion with Toothless the dragon, as well as live performances from the boy band Feuerherz and teen star Iggi Kelly.

The “Toggo Tour” brought a colorful spectacle to Gütersloh.